This gets a bit deep, so bear with me.

A few nights ago, my wife and I were discussing plans for my upcoming birthday in April, which evolved into a conversation about previous birthday parties. I mentioned that I had fond memories of certain parties that seemed to have stuck in my head much clearer than others. One in particular that stood out was my fifth birthday party, when I received my He-Man Big Wheel. 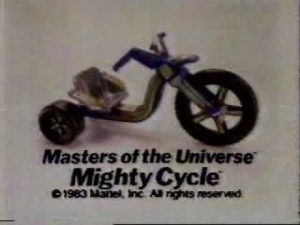 I remember it very clearly. I can see myself receive the present, I can see my family and friends smiling, and I can see the reaction on my face and everything. What a happy memory to have!

Wait a minute… I can see myself?

I asked my wife to think of a really strong memory from her childhood. She remembers being very young and sitting on the swing set at her childhood home. Then I asked if the memory is in first person or can she see herself, in third person. She realizes that she can see herself in the memory. Then I ask the question.

‘If this is YOUR memory, then why can you see yourself? Shouldn’t the memory be in the first person?’

Her head exploded. Not really, but it definitely blew her mind. How could her brain hold a memory from the perspective of a non-existent camera angle?

I did a bunch of research the following day. It turns out that the first person / third person memory phenomenon is well documented.

There are two types of autobiographical memories, Field and Observer. Field memories are ones that you can remember from the first person perspective, and are typically ones that involve a large amount of physical or psychological feelings. Observer memories are from a third person view, are mostly older memories, and typically not as vivid. Some research shows that focusing deeply on an observer memory may trigger a conversion to a field memory, providing more detail.

So, now that we know there are two distinct types of memories, let me ask my question again. How can a memory exist from an angle where I can see myself?

It turns out, the human brain is a fantastic machine. It can construct a complete memory, from any angle, with the littlest of data. Your brain can recreate a moment in your life from a completely independent perspective than you originally perceived it. It takes the sounds, smells, and emotional data that you captured from your perspective, and like the ultimate point cloud, reconstructs the scene for consumption from another angle.

Some people claim that seeing photos and videos from past events can influence the way you remember things. This is very true. In fact, photos and videos can cause some brains to create false memories, which is even more amazing.

There is a large group of people who say that 360 images and video is not true VR. I wonder if the growing popularity of this content has something to do with our brains’ built-in ability to appreciate and understand this format. The VR/AR industry is trying desperately to find the ultimate 3D/360 capture method, using arrays of cameras, photogrammetry, video stitching, and light fields, but still hasn’t mastered it. The human brain figured it out thousands of years ago.

What have I learned from this?

My brain is the most powerful piece of tech in my possession. I am in constant awe of it’s capabilities. We can learn a lot from our brains, and how memories are formed. Someday, VR content will be so real that our brain will accept it as a true memory. To take it even further, it’s possible that someday we will be able to download our memories and share them with others via an HMD.