On October 17, 2014, I drove 47 miles to a remote Best Buy to purchase a piece of technology that I’d been anticipating for months. The Samsung Galaxy Note 4, along with the Gear VR headset that I bought a few months later, was going to finally give me the REAL mobile VR experience that I wanted. At least, that’s what I thought.

At first, the experience was novel, exciting, and somewhat entertaining. I was pleased at the resolution and field of view. It felt so much more refined than the other mobile VR solutions I owned, like the Durovis Dive. Overheating and battery life were my two biggest complaints with the Gear VR. The lenses would fog up rather easily, causing me to wipe the lenses frequently.

How about other mobile VR solutions? There are some decent ones out there, like Merge VR, Homido, and Google Daydream. There are also a thousand ‘Cardboard Clones’ flooding the market that disappoint me on a regular basis.

Now, in 2017, it’s difficult to look back at three years of ‘progress’ in the mobile VR field, and not be a bit disappointed in how far we’ve come. Improvements on the software, headsets, and phone hardware are critical to mobile VR’s success. Here are a few complaints that I have been dwelling on recently.

I find it really hard to believe that this hasn’t been figured out yet. Every phone on the planet (probably) has a back facing camera. How hard is it to give it a wide angle, and allow direct access to it within a headset? All of the solutions I’ve seen so far have offered inadequate frame rate, small FOV, or awful resolution. With good pass-through, you could do all sorts of fun things with Mixed Reality. Hell, even Microsoft’s new ‘Mixed Reality’ headsets don’t have this option. Someone please figure this out.

The one good thing about the battery on the Note 4 was your ability to swap it out. Newer phones has eliminated this option, and current batteries have not gotten large enough in capacity to remove this need. Everyone I talk to wants replaceable batteries in their phones, yet the manufacturers ignore this. VR software eats battery life very quickly, and we need a solution to this.

I haven’t yet to watch a full length movie on any mobile device in a VR headset. It gets too hot. We need giant heat sinks, or fans, or something to fix this issue. I keep waiting for my face to melt off like that dude in ‘Raiders of the Lost Ark.’

I know there are upcoming advancements in this area, and I’m excited to try them once they are available. Since I can’t get it today, I have to keep it on the list. I hope that adding positional tracking to mobile VR doesn’t cause too big of a problem for the software developers in the mobile space. 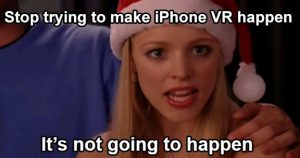 I’m exhausted from having to answer the question, ‘When will Apple have a VR headset?’ Just accept the fact that mobile VR on an iPhone sucks, and Apple doesn’t have a solution for you. I desperately want Apple to either quickly produce a solution, or just publicly announce that people should stop trying to make it work.

Capturing or streaming usage in a mobile VR headset is difficult. I realize that it soaks up valuable resources, and kills frame rate, but some of us really want to mirror our experience on a TV or a monitor for the purposes of recording and streaming.

This is a stretch. I realize that I am asking way too much, but I need to get this out there. Just like Big Screen or VR Desktop provides for the PC, I want to use my Android phone’s OS in a VR format. Let me read email, Twitter, Facebook, etc without having to go to a browser. Native mobile VR apps and a native VR OS need to happen.

360 Cameras on All Phones

More of a content creation thing, but I still think it falls into the mobile VR topic. Almost every phone has a front and back camera. Just like with pass-through, give them wider angle lenses, make them back to back, and the same resolution. Boom. Done. Maybe Ricoh wlll make a Theta phone someday.

I already hear the responses to these complaints. Phones are under-powered, and can’t handle some of these requests. I need to be realistic. Hardware manufacturers aren’t focused on these things, so it’ll be years before some of these are resolved. I know some of you have much different complaints, and those might be even more important than the ones I brought up.

We need to be vocal about the features we want, even if they are impossible or improbable. Phone manufacturers eventually gave up on the physical keyboard (mostly), as a result of their customers getting comfortable with screen typing.

We are the customer. We buy what we want based on the features of the product.

Hopefully the next generation of mobile VR will address some of these issues.