Call this clickbait all you want, I seriously want to make sure people read this post, so the title is… a bit horrible.

I was super excited to see that Google released their Google Earth VR experience this morning. It makes perfectly good sense that this is being described by some enthusiasts as a ‘killer app’ for VR. Who doesn’t want to go visit their childhood home, or take a virtual trip to some amazing tourist sites, all from the comfort of your own comfy VR chair.

As many of you know, SteamVR is not limited to delivering amazing content strictly to the HTC Vive. In fact, the OpenVR SDK is explicitly described as being a cross-platform VR API, allowing most, if not ALL HMDs to enjoy the pleasures of experiences built with it. That is, as long as the developer doesn’t do something to intentionally block certain headsets. 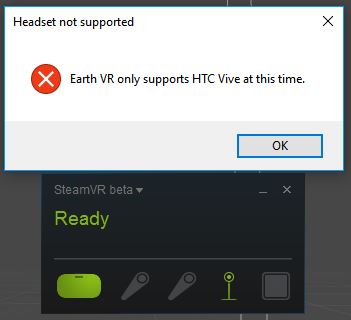 I have publicly stated that I am a Rift fan. I have nothing against the Vive, nor do I look down on fans of the device. I just enjoy my Rift more. I still use my Vive on occasion for certain games/experiences, but mostly I just toss on the Rift and off I go into the Metaverse.

Not today. Google INTENTIONALLY chose to not allow ANY HMD other than the HTC Vive to enjoy their new Google Earth VR app.

Who benefits from this type of action. Was this part of a deal cut with HTC for exclusivity? Then why not release it on Viveport instead of Steam? Was this designed NOT using OpenVR, and there is no intention of future support for other PC HMDs? That seems like an odd direction to go, in my opinion.

There is some speculation that Google is buying HTC, since they built their Pixel phones, which are major components to Google’s new Daydream setup. It’s not like Google Earth VR will be capable of running on Daydream in it’s current form, so I’m not sure if I see any value in Google buying HTC. Then again, stranger things have happened. Look what Google did to Motorola.

I am very disappointed in Google, and I am calling them out.

I want:
… an explanation as to WHY they restricted the app to only the HTC Vive,
OR… make a Rift build and throw it on the Oculus Store,
OR… fix the SteamVR version to allow the Rift/Touch to work.

Please fix this, Google. I don’t like being mad at you.