Many of the conversations I’ve had lately about the state of the VR Industry have included references to the Gartner Hype Cycle Chart. There are many versions of the chart, but most of them indicate that the VR Industry is very clearly in what is called the ‘Trough of Disillusionment’. This is defined as the period of time, after the first generation of products have been released, where some implementations of the technology have failed, waning interest begins, and several startups have shriveled up and died. 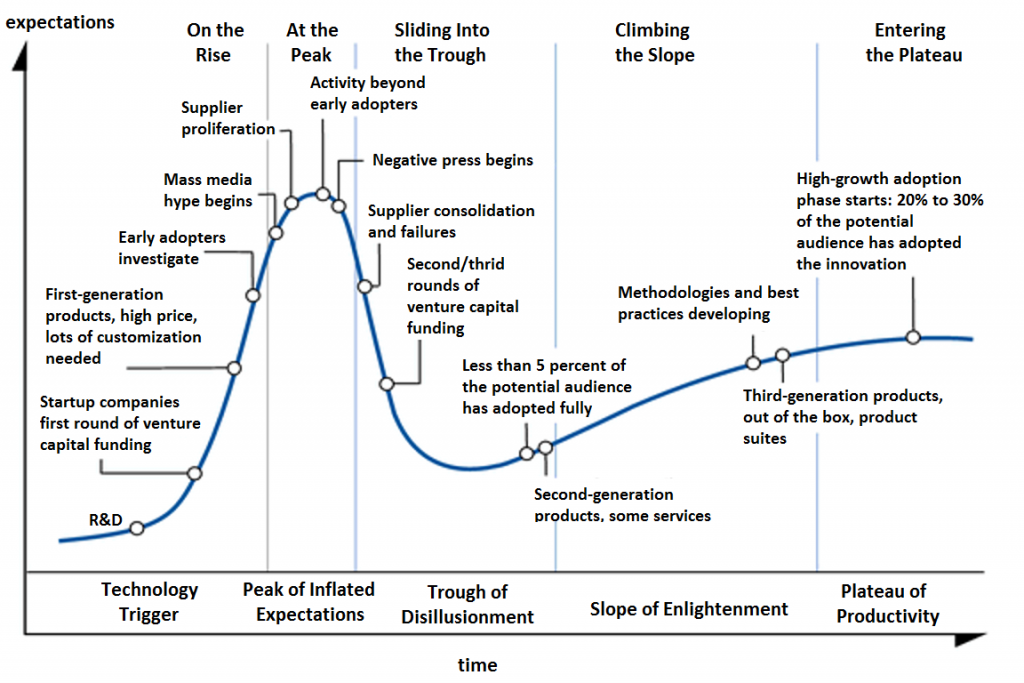 When I look at certain versions of the chart, it appears that the second generation of hardware will be the stepping stone that will allow us to dig our way out of the ‘Trough of Disillusionment’. This raises several questions for me.

1. What do we want in a second generation VR Headset?

One of the biggest challenges for roomscale PCVR is the damn cable. I’ve heard grumbling in both gaming and enterprise circles about the need to untether the HMD for safety, convenience, and setup. Folks are tired of getting wrapped up and almost strangling themselves.

4K, 4K, 4K. Heck, even 8K is on the horizon. Inexpensive OLED screens with lower power consumption, faster refresh rates, and higher DPI are almost ready for the next gen of HMDs. 16K per eye is the ultimate goal.

Nice clear lenses, that allow a huge field of view, and a huge sweet spot would be really nice. 210 degrees? Sure! Does that mean we need bigger screens too? Why not!

We all want the Doc Brown style HMD from Back to the Future II. Some folks may even want something smaller. Second gen really needs to iterate on form and weight at least a little bit.

As the tech in these things get easier to build or acquire, the cost should come down. Second gen can be same price first gen originally was, but then lower the price of first gen products down to a more affordable entry point for average consumers. The word ‘Affordable’ means something different for everyone.

We might have to wait until third gen for some of this stuff, but everyone seems to want to have eye tracking, including foveated rendering, face tracking for social VR, and the ability to see your own hands.

Next gen of mobile VR needs to have positional tracking of some sort. Hand controllers need to be implemented too. With newer chips like the Snapdragon 835 , I expect mobile VR to become way more powerful in the next iterations.

2. When is the right time to release the second generation of VR Headsets?

I would love to say, ‘RIGHT NOW! GIVE THEM TO US NOW!’, but I’m doubting that any one HMD manufacturer is prepared to release a second gen headset without tackling at least two or three of the items I listed above. An iteration on VR headsets without significant increase in features would just be a cash grab and would further muddy the already murky waters.

I would say that by Q1 of 2018, we should at least get announcements of second gen headsets from the current major players. (Oculus, HTC, Sony)

3. What is being released this year, and does this count as second generation?

I know many folks are anxious about the Microsoft powered HMDs from several well known manufacturers. These are apparently PCVR headsets that have Hololens-style inside-out tracking, and will cost significantly less than current VR front runners. They will also require a significantly lower powered PC, which makes them much more appealing to the average consumer. But…

Is this really a second gen headset?

I’m going to say NO. I feel like these Microsoft HMDs are still very much generation one, if not less. My opinion is that these headsets are closer in comparison to the Oculus Rift DK2 in terms of their feature set, despite being newer products. I welcome these products to the market though, because I know they will flood into the stores and hopefully provoke mass adoption. My concern is that we are taking a slight step backward before we move forward.

We have a few months before the big players will publicly announce a second generation that fulfills some of my above requests. We already know that prototypes are floating around, and tracks to success are being forged.

We just need to have a bit of patience, and maintain our confidence in the industry, in order to dig ourselves out of this trough.