We’ve lived in Seattle for two years now, and during that time, I have only had a handful of visitors from my hometown of Cincinnati, OH. Last week, I was blessed with a visit from my parents, sister, and her family.

Due to my status as a ‘Q-List’ celebrity and ‘Influencer’ in the VR/AR space, my phone is constantly bombarded with emails, pings, tweets, tags, and all sorts of social media interruptions. Before my family arrived, I challenged myself to unplug and walk away from it all… for a whole week. I wanted to spend quality time with my family, since proximity limits their availability.

Here were my rules:

-No Twitter. No Tweets. All notifications turned off.
-No email. Notifications left on in case of an emergency, but mostly ignored.
-No Facebook posts EXCEPT to share pics from our vacation time before bedtime. Comments and notifcations turned off.
-No Instagram
-No Snapchat
-No Slack
-No Skype
-No Discord
-No Reddit
-No Facebook Messenger
-SMS only allowed with members of visiting family.
-No Pokemon Go
-No Pocket Mortys
-No mobile games in general.
-No VR, AR, PS4, DS, or any other electronic distractions.
-Television only allowed when viewed with visiting family.

It was a bold, ambitious goal. I think my family was skeptical of my ability to follow through, but I was determined.

Woke up, rolled over, and immediately grabbed for my phone. Looked at the time, and put it back down. I had 3 hours before I had to pick my family up at the airport. I left my phone on the nightstand, and continued with my morning routine.

Fittingly, I usually browse Reddit while I make my morning bowel movement. Today, I did not. Instead, I stared at the water spots on my shower door. Next, a shower, then I got dressed, all without my phone. I wandered into the kitchen and made coffee. A quick glance at the clock on my microwave showed that I had completed my entire morning routine 20 minutes faster than I usually do. Interesting.

I drove to the airport, using my phone’s GPS to guide me around traffic, then shoved it back in my pocket. Normally, I would have taken the opportunity to grab a few Pokemon around the airport. Instead, I listened to a local jazz station on my car radio while I waited for their arrival.

I met them at baggage claim, and after a dozen hugs, we headed back to my palatial estate.

Once everyone was settled in, we planned out our itinerary for the week. I found myself occasionally grabbing my pants pocket, just to make sure my phone was still in there. I never took it out, but I felt the need to remind myself of its existence.

At the end of the first day, I transferred my phone from my pocket to my nightstand. Normally, I am racing to plug it in right after dinner while struggling to hold onto its last remaining 2% of battery life. Today, I still had an amazing 69%. Unbelievable.

We went to see Snoqualmie Falls and the surrounding area. Snoqualmie is a quaint town, with a train museum and several antique stores. My phone came out a few times to capture some photos, but always went right back into my pocket afterwards. We stopped at a small Italian restaurant for lunch, and I found myself engaging in conversation instead of fiddling with my phone. As I looked around the restaurant, I saw several booths occupied by families staring at phones and not acknowledging each other at all. While walking around the town, I noticed many people holding their phones in their hands, even though they weren’t looking at it. Their phones had become an accessory, like a ring, or a bracelet.

We took the kids to our neighborhood pool that evening. Most of the parents there were face down in their phones while their kids splashed around. At one point, I felt like I was the only adult paying attention to the kids. It was very eye opening. Battery life at the end of the day was a whopping 72%. 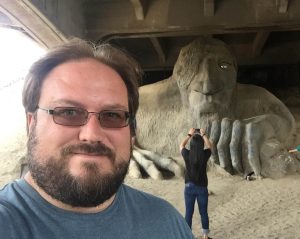 Later, we hit some popular tourist sites around Seattle. Pics and GPS only for me, but the amount of selfies I witnessed was almost comical. I watched two teenage girls spend ten minutes trying to get the perfect angle and pose in front of the Fremont Troll.

By the end of Day 3, I was starting to get a bit itchy. What was I missing on social media? Did my followers even notice I was gone? It was hard, but I resisted the temptation to go look. Battery life at the end of Day 3 was only 24% due to heavy GPS usage.

Time to hit the Space Needle and Pike Place Market. Lots of photos today, but no other phone usage. There was some sort of event happening near the Space Needle, and I was heavily tempted to whip out my phone and look it up. Instead, I had a conversation with a nice man near the entrance who explained what it was. Human interaction providing results instead of the Internet. How novel.

I am still fascinated at the number of people who walk with their phone in their hands. I think that my own lack of usage made me super aware of others doing what I could not. I laughed at them, but was also jealous. A strange combination of feelings.

Today is going to be the hardest. With only a few local items on our itinerary, the temptation to pass the time with my phone will be high. We hit a mall in Redmond where some of my group broke off to shop while others waited outside with the kids. I started to sweat. Nothing to do but stare. I noticed a few people sitting on a bench, staring at their phones. A few others sitting outside a Starbucks, also on their phones. A woman feeding a baby, while pecking at her phone. I knew it was bad when I became jealous of an old man, standing outside Victoria Secret, blasting away at the keyboard on his Blackberry.

I survived. I didn’t take any photos today, nor did I use my GPS. As a matter of fact, I barely touched my phone at all today. 79% battery life at 10PM.

We dropped them off at the airport today. I was finally allowed back on my phone, but we ended up staying out and shopping for a bit. By the end of the day, I started to turn notifications and whatnot back on. I had such an overwhelming about of stuff to catch up on that I ignored it for the rest of the evening and just relaxed. One more day without me isn’t going to hurt anyone. 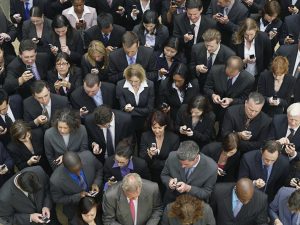 I did it. I unplugged for a week, and I didn’t explode. In fact, I learned that it can be quite peaceful to just exist in a moment and not be bothered by the rest of the world. I enjoyed spending uninterrupted time with my family. My attention was focused on the here and now, which gave me a smaller world to enjoy more thoroughly.

I’m back online now, and swimming in tweets, tags, posts, and IMs. I missed it, but I also liked being without them for a bit. I realized that life it about balance, not inter-connectivity. If I add up the amount of time I normally spend on my phone during a week, it would have taken the equivalent of a whole day away from my time with my family.

Time is a commodity that cannot be purchased, for any amount of money. Every day, we spend our time doing mundane and possibly pointless things. Only after we’ve spent it all do we realize the true value of time.

The next time you find yourself spending time with your family or friends, and you have your phone in your hand, try putting it away and enjoy the moment… uninterrupted. 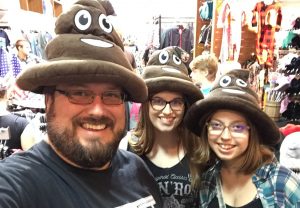