While wondering the halls at Microsoft Build this week, I had a chance to take a spin in the Acer Mixed Reality HMD. After hearing multiple good and bad things about this device, I was excited to try it for myself and report back to my fans.

The Acer Mixed Reality HMD is one of several upcoming Microsoft headsets that are produced by well-known manufacturer names such as HP, Lenovo, and Acer. Micosoft is heavily pushing it’s ‘Mixed Reality’ branding that takes advantage of Hololens style inside-out tracking, and the Universal Windows Platform (UWP).

There were several booths demonstrating the Acer MR HMD at MS Build. I was surprised to see a wide variety of demos being used to show off the headset, ranging from music videos, to networked experiences. I chose the one with the shortest line and donned the headset. 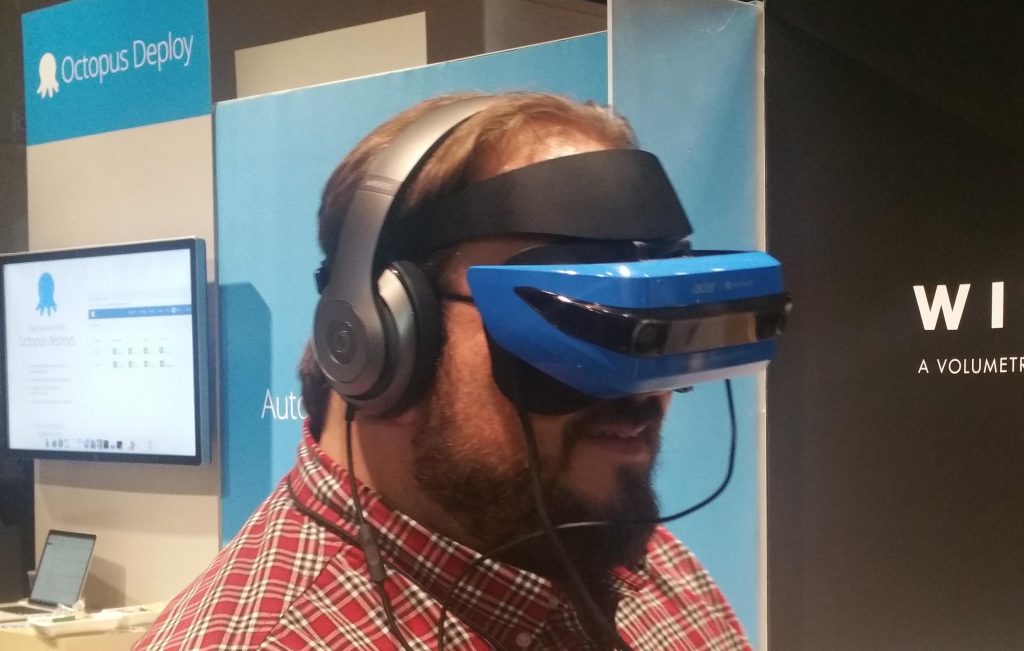 What can I say that isn’t obvious from the photos. The headset is, as a friend recently said, very ‘Robocop-ish’. The blue color and smooth curves do make this a more stylish looking HMD than what we have previously seen.

The Acer MR HMD uses a hardhat style of band that sits on your head like a baseball cap and tightens in the back. I found the strap to be too small for my oversized head, so if your skull is bigger than mine, then you might find this headset to be a bit tight. There is a bit of padding in the front that comfortably presses against the top of your forehead. The goggle component (not sure what to call this) flips down and even fit over my glasses nicely. Once it was fully on my face, it only took a small moment of adjustment before I found a sweet spot of comfort and focus. The headset felt super light on my head as most of the weight was being dealt with by the head strap.

Perfectly round Fresenel lenses, similar to the Oculus Rift. I felt like the concentric circles of the lenses were a bit larger than the Rift’s, but once I was in the headset, I hardly noticed a difference. I suppose the screen had something to do with this as well. As far as FOV is concerned, I would say it was adequate (95 degrees), but blurring did occur on the outside of my vision. I feel like the lenses have an average size sweet spot, and moving your eyes to look around make the blurriness around the edges noticeable. 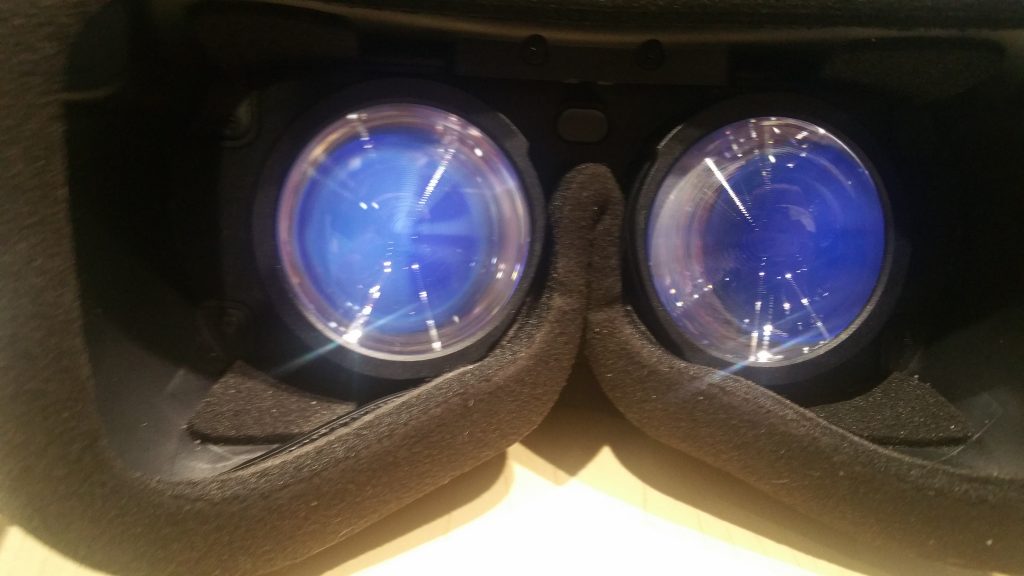 According to Microsoft, the Acer MR HMD has a 1440 x 1440 LCD display for each eye that can run UP TO 90 FPS. Notice that it says ‘UP TO‘. I know several people were saying that an LCD screen is a terrible step backward in terms of technology, since the other mainstream HMDs have AMOLED screens. I can honestly say that the screen really impressed me. I was expecting terrible clarity, inadequate framerate, and washed out color. Nope. The screen was impressive and if nobody had told me it was an LCD screen, I would have never guessed it. LCD doesn’t have black blurring, like the AMOLED screens have, which I did notice.

I was hoping to try the new hand controllers that just got announced at Build, but nobody seemed to have them. The headset I tried was strictly using the tracking for position, and I really danced around to try and break it. I couldn’t. It felt smooth and didn’t have any trouble when people walked in front of me. I’ve always been impressed with the tracking on the Hololens, so I shouldn’t be surprised that this headset was also performing wonderfully. I hope the controllers perform equally as well, but the jury is still out on them until they get into the hands of… anyone.

This is the thing that bothers me about these new Microsoft HMDs. They keep using the term ‘Mixed Reality’ to describe these headsets, but honestly, without pass-through cameras, I can’t agree on using this term. The whole point of using the term ‘Mixed Reality’ for the Hololens was to differentiate it from other ‘Augmented Reality’ experiences. If you can’t see the real world through these new HMDS, then aren’t they just ‘Virtual Reality’? I’m still confused about this.

At $300, I’d buy this headset, and I would recommend to others to do the same, if cost is an issue. I still favor my Rift and Vive over the Acer, but I can see how this headset will help open the doors to a value driven consumer.

Content? That might be a deciding factor with these headsets. How quickly can they build up a content base for the people who do decide the buy them? Can they play Robo Recall or Raw Data? If not, then the lower price point might not matter. Only time will tell that story.