I work on the third floor of an office with three other developers. It is a fun group of guys, and it is not uncommon for us to kick out some great tunes, or spark up awesome conversations about whatever tech news is hot that day. We aren’t a rowdy bunch, but occasionally the folks on the first and second floors have to come up and tell us to keep it down.

Within this space, we each have a workstation with multiple monitors, shelves full of VR and AR gear, and a huge pile of cables and components. I wouldn’t call it a small area, but I wouldn’t call it large either. It isn’t unusual to see one or more of us standing up, wearing a VR or AR headset, and testing out our latest creations.

This is where my problem lies.

I turn away from my desk to see my colleague, Dell, wearing a Hololens and staring right at me. 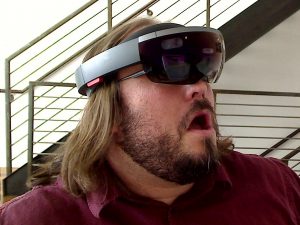 I then see him move his hand upwards, as if to throw an invisible ball up into the air, and I know that he is doing the Microsoft ‘bloom’ to bring up the Hololens shell. He’s not looking at me, nor is his intention to get my attention. He just happens to be aimed in my general direction as he focuses on the holographic world he is testing.

I can’t see his eyes. The darkened plastic visor of the Hololens prevents me from discerning his gaze direction. As he moves around, he mumbles a few voice commands, that again, may or may not be directed at me. I turn back to my desk and continue working on my code.

A few minutes later, Dell approaches me again, still wearing the Hololens, and blooms with his hand. This time he says, ‘Lunch today?’ and it takes me a few seconds to recognize that his question was pointed at me. I stare at his grinning face, but cannot make direct eye contact. It feels odd.

A lot of people believe that AR headsets, such as the Hololens and the Meta, have an advantage over VR because you can still interact with your real environment, and others in your space. Nobody ever points out that the current iteration of AR headsets are not conducive to direct eye contact with each other.

This isn’t a complaint, but rather an observation of the current state of AR headsets. If we want AR to be group friendly, then I highly recommend that the lenses become a bit clearer.

“Don’t fire until you see the whites of their eyes.”
-Battle of Bunker Hill