We want our hands in virtual reality. That is a fact that very few people will dispute. The part that most people debate is which technology should be used to provide this feature. 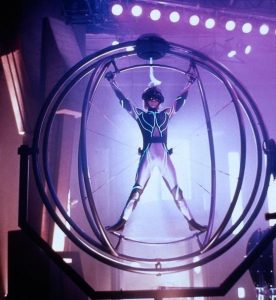 Hollywood made several assumptions about the nature of input for VR back in the 1990s. It’s not their fault though, since the promises being made at the time seemed to be trending in the direction they depicted. Full body suits, and gyroscopic locomotion appeared to only be a few years away. As technology in the field began to fade away, the next generation of movies tried to depict a more streamlined, ergonomic approach. Closer, but still not what we have right now.

What does the future hold for VR input form factors? Motion controllers that you grab onto, gloves, or something else entirely?

The HTC Vive has their Lighthouse controllers. The Oculus Rift has Touch controllers. Gear VR and Daydream both have little remotes, and Leap Motion is still pushing for controller-less hand tracking. Microsoft just announced a set of controllers will ship with the Acer HMD.

For the longest time, I thought it would be more comfortable to have my controller attached to my hand to relieve the stress of holding it. After a long session of VR, my hands start to get tired of holding the controller. If I could just let go and have it stay in my hand, that would make all the difference. 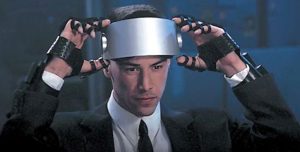 If you’ve gone to any VR expos or conventions, you know that the concept of a VR glove is being worked on by at least a dozen companies. Some are covered in IMUs, some are wireless, some have haptic feedback, and some are really cumbersome.

They all have one thing in common…

People sweat, especially when they are actively participating in a VR experience such as Raw Data or Robo Recall. Sweat makes gloves difficult to put on and take off. Covering your hands makes them sweat even more.

Have you ever tried to put on a pair of sweaty gloves that someone else just took off?

We know that Facebook/Oculus is working on VR gloves. We also know that there is a version of the Lighthouse controllers that strap onto your hand. I have a feeling that gloves might become a thing.

What do you think? Should gloves become the standard VR input solution? Will some company create a glove that doesn’t end up a moist, sticky glob after a long VR gameplay?