In 2014, I attended E3 for the first time in my life. It was the largest convention I had been to at the time, and I remember being in awe of the thousands of enthusiastic geeks who mobbed the entrance when they finally opened the doors to the main hall. 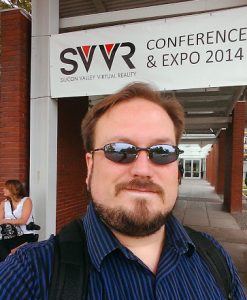 A month earlier, I had attended the first ever Silicon Valley Virtual Reality (SVVR) Convention & Expo. In some ways, such as the size of the venue, the attendance numbers, and the amount of money spent, it was drastically different from the hordes at E3. What made it similar to E3 was the excitement, the energy level, and the basic concept of community driven growth. I have attended dozens of expos since then, and religiously continue to go back to SVVR each year because of it’s amazing growth and for the energetic comradery.

We joked at SVVR 2014 that it wouldn’t be long until events like this would naturally evolve into online, virtually attended celebrations of technology. With millions of headsets spilling out into the world, and the early adopters being the obvious participants in such an online experience, it made logical sense that we weren’t far away from a true ‘virtual convention’.

I have seen some phenomenal work done in the social VR space by companies such as VRChat and AltspaceVR, allowing groups of people to gather online to share experiences, media, and conversation, all without leaving the comfort of their home. While these events are mostly small, intimate experiences, there is potential for a well organized, funded, and structured convention, held within our new Metaverse.

I know that the biggest arguments against an online only event are valid:

How do companies show off and demo their new hardware?
Can I allow someone to play my game/experience from within an online event?
How do we distribute business cards/pamphlets/SWAG?
Can any one social VR platform handle thousands of attendees?
How do we handle trolls?

There are probably dozens of other challenges to an event like this that I didn’t mention. What I would like to see is someone actively tackling these issues so we can at least attempt to host a truly 100% virtual convention. I know so many people would love to attend expos and conventions, but can’t due to distance, cost, time, or event social anxieties.

I feel that it is the responsibility of the VR community to be the ones to make this happen. I am actively calling out the social VR platforms to overcome these challenges and give birth to the first virtual convention.

I will offer my services as the emcee of this event, of course.

If you want to attend a really hot VR event, then come join my at SVVR 2017!